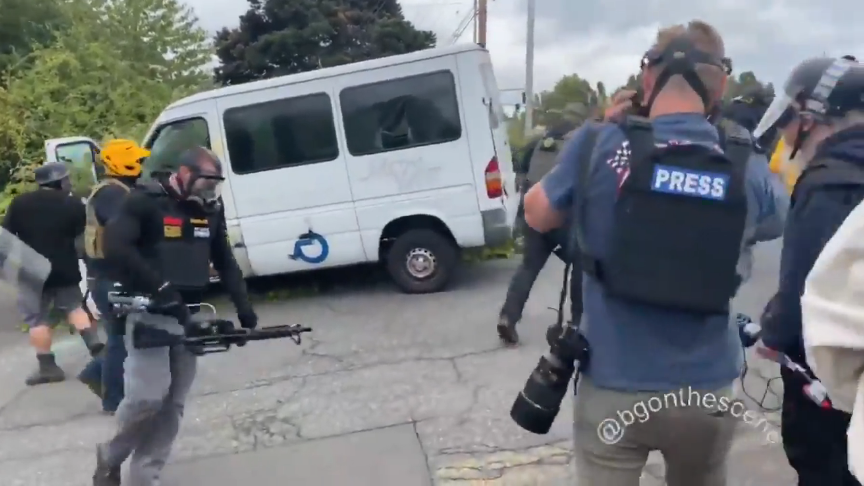 Thousands of people in Portland, Oregon attended rallies on Sunday that turned violent.

Two groups of people had gathered in different parts of the city, which was changed by a far-right group.

Smoke devices and fireworks launched as a group of about 50 in black bloc arrived at the Proud Boys/right-wing protest at the abandoned Kmart in Portland pic.twitter.com/XzDscJpTeo

100 people attended a right-wing rally in the parking lot of a former Kmart and clashes began once it was over. A driver attempted to infiltrate, but crashed before he could make it inside and ran away. Afterward, demonstrators set off fireworks, which apparently caused injuries although their severity is undetermined.

Later, shots were fired near demonstrators downtown. According to Dustin Brandon Ferreira, a left-wing activist who was with other protesters Sunday evening when an armed man used a slur before shooting rounds in their direction.

Portland police arrested a man after nobody was injured during the incident.

Demonstrations by anti-fascist groups had drawn more than 200 people downtown.

Portland police called in all available personnel to prepare for the upcoming demonstrations.

Despite the expected clashes, Chief Lovell says that police won’t necessarily be standing in between opposing groups.

Lovell and Portland Mayor Ted Wheeler did not specify the groups that are expected to gather, but these two entities “may choose to confront one another.”

Oregon State Police, the sheriff’s office and other local partners also helped with the situation.

Similar events in Portland between groups with differing political affiliations have resulted in violent clashes. Sunday’s event falls on the one-year anniversary of a violent clash where the two opposing groups were fighting next to police headquarters for hours.